Penelope Cruz urges us to ditch the fur

Actress and model Penelope Cruz has come out in support of banning the use of fur in fashion and clothing in a recent shoot.

The campaign a partnership with PETA has been launched in time for Christmas and aims to help consumers think about where exactly their clothing materials come from. As many of you will know, the fur industry is one of the cruelest and disgusting there is and one that PETA and many great organizations have been fighting for years.

Seeing a huge name such as Penelope Cruz will hopefully spur her many fans and the general public to think twice about purchasing such an item this Christmas.

Here’s a little of what she said about the campaign:

“I’m strong and opinionated,” says Penélope Cruz. “Those qualities brought me a lot of problems since I was a little girl in school, saying, ‘I don’t agree,’ and fighting with the children. It’s part of my curiosity for life.”

But strong, opinionated people who are prepared to stand up to others are exactly who animals need in their corner. So the fearless Cruz is partnering with PETA to oppose one of the things she doesn’t agree with: fur.

Together with one of her feline friends, the Oscar winner and perennial “best-dressed” list member is joining with PETA once again for a new ad that’ll strike a chord with anyone who cares about animals.” 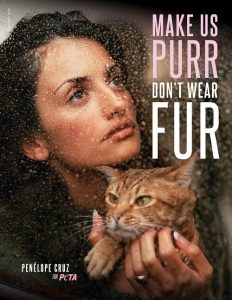 Huge respect for Penelope for supporting this great PETA campaign!

If you want to see more celebrity vegan news, check out our news section here.

Why I’m Vegan by Moby

The Very Good Butchers team up with Pamela Anderson