Podcasts, A Vegan Chat With...

10 Quick Questions with Liz Douglas from The Vegan Diaries Podcast

When Liz Douglas of Vegan Diaries tapped us on the shoulder to be part of a brand new podcast focused on in-depth conversations with vegans from around Australia we were humbled and thrilled.

We have followed Liz’s journey for a while now and it has been amazing to see the evolution of the brand bought to life with her new podcast and medium.

Liz shares a similar ethos to us here at Let’s Go Vegan! and aims to be warm, open and non-judgemental when it comes to welcoming everyone into the movement no matter what stage of the journey they are on.

To coincide with the launch of the podcast, Liz is now releasing an episode a day for the first 7 days with a whole host of fantastic vegans taking part in the initial episodes.

We thought we would find out a little more about the person on the other side of the interviews with 10 quick questions with Liz.

1. How did you get the name vegan diaries?

From a self-proclaimed meat eater actually! Haha. I was out at brunch with two girlfriends not long after going vegan. I’d been sharing a lot of my vegan cooking on my personal Instagram page since I’d made the change and I had the idea of starting a dedicated account just for my food. I asked for their help in deciding on a name – I was originally thinking ‘Liz cooks vegan’ (I think I had seen Nora Cooks Vegan somewhere and was unintentionally influenced!) but one of my friends suggested Vegan Diaries. I don’t know what made it pop into her mind, but I’m so glad it did, because it’s really become part of my identity. I like it because I feel it’s a good reflection of my journey: exploring the world of veganism and documenting interesting learnings along the way – not an expert, just a person sharing their experience 🙂 It’s kind of funny because that friend has always been quite a big meat eater, but is very supportive of me being vegan.

2. What was the pivotal moment that turned you vegan or started the journey towards veganism?

It took a long time for me to go vegan, there were lots of little ‘seeds’ that eventually culminated in me going vegan in 2019. I think I always had the values of a vegan, but it just took me a long time to make the realisation and change my behaviour. I was raised in the country on a hobby farm, and at one point or another we must’ve had every species of pet that you can buy. Everything from hermit crabs, to mice, guinea pigs, horses, dogs, cats, rabbits, goats, chickens and ducks. I helped take care of all these different species and loved being around animals, they have always brought me so much joy. My parents really fostered that love of animals in my sister and me. I tried going vegetarian a couple of times while I was in high school, but it never stuck. It wasn’t until my mid twenties when I went on a trip to Vietnam that I really started to question my meat consumption. I knew before the trip that dogs are eaten in some parts of Vietnam, so I looked up the words for ‘dog meat’ in Vietnamese so I wouldn’t accidentally order it at a restaurant. It shows how ignorant I was because it really isn’t that widely consumed, and I didn’t see anything for most of the trip, until we were towards the end of our trip in Hanoi. On one drive out to HaLong Bay, a woman drove past our tour minibus on a scooter with two chicken-wire cages strapped to either side containing a few dogs piled on top of one another. I stared at the dogs and made eye contact with one as she was flying past and it just rattled me. Then later on the trip as we were leaving for the airport, I saw cooked dog meat at a market stall, and on the same drive out, a sign for a dog meat restaurant (I recognised the words I’d memorised). I felt so sick and upset that anybody could eat dogs, but I recognised that I was being hypocritical by still eating other animals, and thought about going vegetarian. It wasn’t actually until 9 months later that I went pescetarian, and then 3 years later, after coincidentally seeing a mouse stuck in a trap, alive and suffering, that I started researching animal rights again. I listened to the How to Go Vegan podcast and watched Gary Yourofksy’s ‘The Most Important Speech You’ll Ever Hear‘ on YouTube, and they convinced me that going vegan was the right thing to do. My sister and her partner were already vegan and that helped immensely in normalising the idea.

3. Which vegans inspire you?

There are so many to choose from! I know there are some incredible activists out there doing work I could never be brave enough to do – Tash @veganbootyy always blows me away with her gutsy demonstrations.

I am extremely grateful for the work of Dr Melanie Joy, author of Why We Love Dogs, Wear Pigs and Eat Cows, who has helped articulate the psychology and social challenges of being vegan. I didn’t fully understand my own feelings until coming across her work.

On YouTube I really like Unnatural Vegan – she calls out misinformation and is a great example of “balanced veganism” plus she’s very down to earth and has a good sense of humour.

But I am mostly in the foodie-vegan space so within that community I really admire Jade from @panaceaspantry, Nisha Vora @rainbowplantlife, Ellie Bullen @elsaswholesomelife, plus local foodies like Nicola Holmes @veggie_nerd, Sarah Brown @melbournesvegan, Jessy Wallace @jessy.wallace, Chelsey Johns @likeavegan plus Zac Bird @zaccharybird for his absolutely hysterical reels.

4. What book or documentary does everyone need to read/see?

I would LOVE for everybody to read Animal Liberation by Peter Singer.

But I think Gary Yourofsky’s ‘The Most Important Speech’ YouTube video is a great accessible place to start. 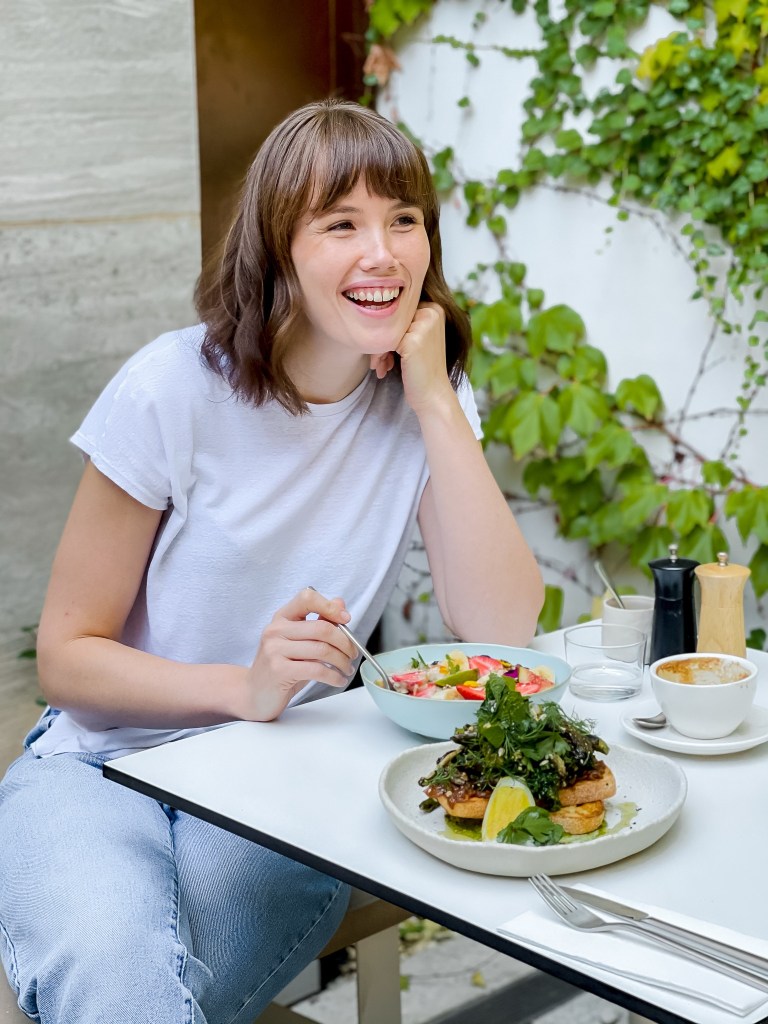 This is tough, there are so many great vegan places. Union Kiosk, Madame K’s, Smith & Deli are all old favourites.

But if I had to make a call – I’d say Red Sparrow Pizza – the Verde is my favourite.

I love a mock meat burger as a treat! But curries are my usual go-to.

Soy flat white with half a sugar please! I drink Soy 9 times out of 10. I like to mix things up and swap to Oat milk occasionally.

8. Where do you hope the Vegan Diaries will be in 3-5 years?

I hope Vegan Diaries will continue to grow and be a hub to connect people in and outside the vegan community. I love meeting people and I want to help as many as I can in a friendly, approachable way. Ultimately I want to help reduce animal suffering by raising awareness. I could see myself potentially getting involved in some sort of outreach or activism in the future, maybe something on the corporate side of things. But who knows! I am happy to let things evolve naturally.

9. What is your number one hope for the podcast?

To reach people who are not yet vegan and inspire them to make a change. Everybody is welcome.

10. Who should we interview next?

1. Sarah Brown @melbournesvegan to talk about her epic recipe reels

2. Jessy Wallace @jessy.wallace to talk about her beautiful vegan baby Aldo and life as a vegan mum

Thank you so much for the chat Liz!

To find out about other vegan podcasts, visit our podcast section here for more.