A Vegan Chat With Tash Peterson of V-Gan Clan Clothing

A Vegan Chat With Tash Peterson of V-Gan Clan Clothing. 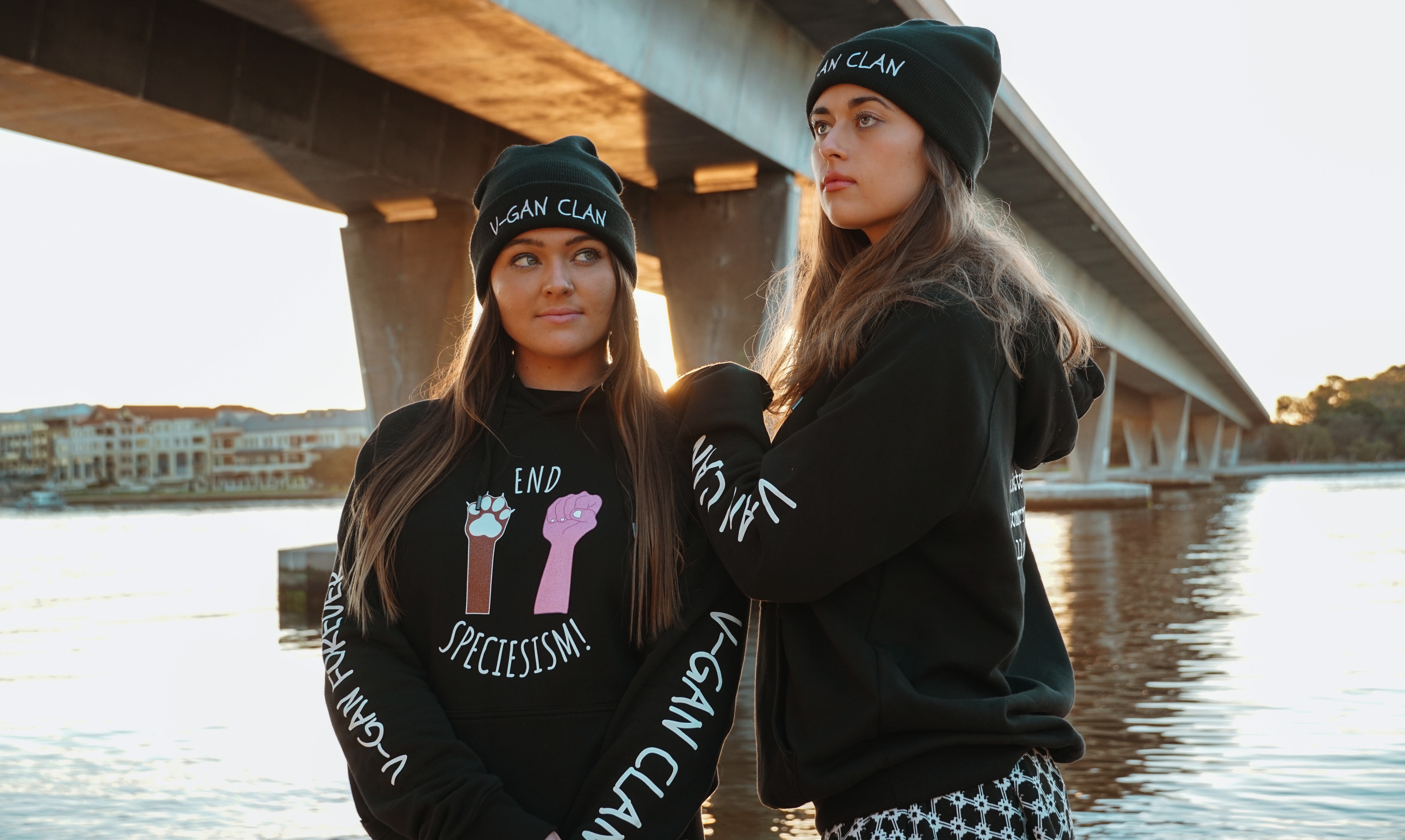 We all remember earlier this year when animal activists stormed farms and created a media storm around the country, in part to draw attention to Australian documentary Dominion.

During this period Western Australian girl Tash Peterson was getting the chance to put her passion to the test as she campaiged for animal rights.

She has since started a vegan clothing brand and continues to advocate for animal rights.

We spoke with her recently about her vegan journey and the important work she does.

You became an activist overnight, what was the tipping point for you within the documentary Food Choices?

There were a number of reasons that contributed to my lifestyle change. Discovering that animal products cause disease, cancer, and other health issues; becoming aware of the animal cruelty and exploitation involved in the meat, dairy and egg industries and learning that animal agriculture is a driving force of climate change.

It is also the leading cause of deforestation, ocean dead zones, species extinction, water pollution, and habitat loss. Health benefits, animal rights, and environmental issues all contributed to my decision to make the change to veganism overnight.

Once I had discovered the truth about animal agriculture in the documentary, I immediately started researching and posting on social media to make my friends and family aware of what was happening to the animals and environment purely based on our decision to consume animal products.

What has been the most effective form of activism for you personally?

All of the Direct Action Everywhere events have definitely been the most effective form of activism that I have been involved in. The forms of activism in DxE vary and the confrontational actions are definitely controversial, even amongst the vegan community. For example, going into restaurants and exposing the truth, disruptions at events which support animal cruelty and civil disobedience. Many vegans are against these types of activism and don’t realise that they are all peaceful actions, which is sad because it is actually the most effective in my opinion.”

Firstly, due to the fact that these actions gain media attention to reach a mass audience with a strong message for animal liberation. Secondly, because people become exposed to animal cruelty caused by their actions and start thinking about veganism. We need a strong and powerful voice for the trillions of animals who are brutally murdered for their bodies and secretions, and DxE is perfect for obtaining that. If you are a vegan who is against DxE and civil disobedience, then I ask you to please try it for yourself. Ask yourself, if people had dog flesh on their plates would you be acting differently? Remember that all beings are the same and the urgency is real!

You started the label V-Gan Clan, tell us about the venture and what inspired you to start it?

I came up with the idea of V-Gan Clan shortly after becoming vegan in 2017 when I had been endlessly browsing for animal rights clothing to only find designs that didn’t appeal to me. I wanted to create a fashionable streetwear look with a powerful message, so that is when I decided to start up V-Gan Clan. I have always enjoyed art, so I decided to draw some of my own designs and then collaborated with a graphic designer to put my drawings into Illustrator for clothing designs. 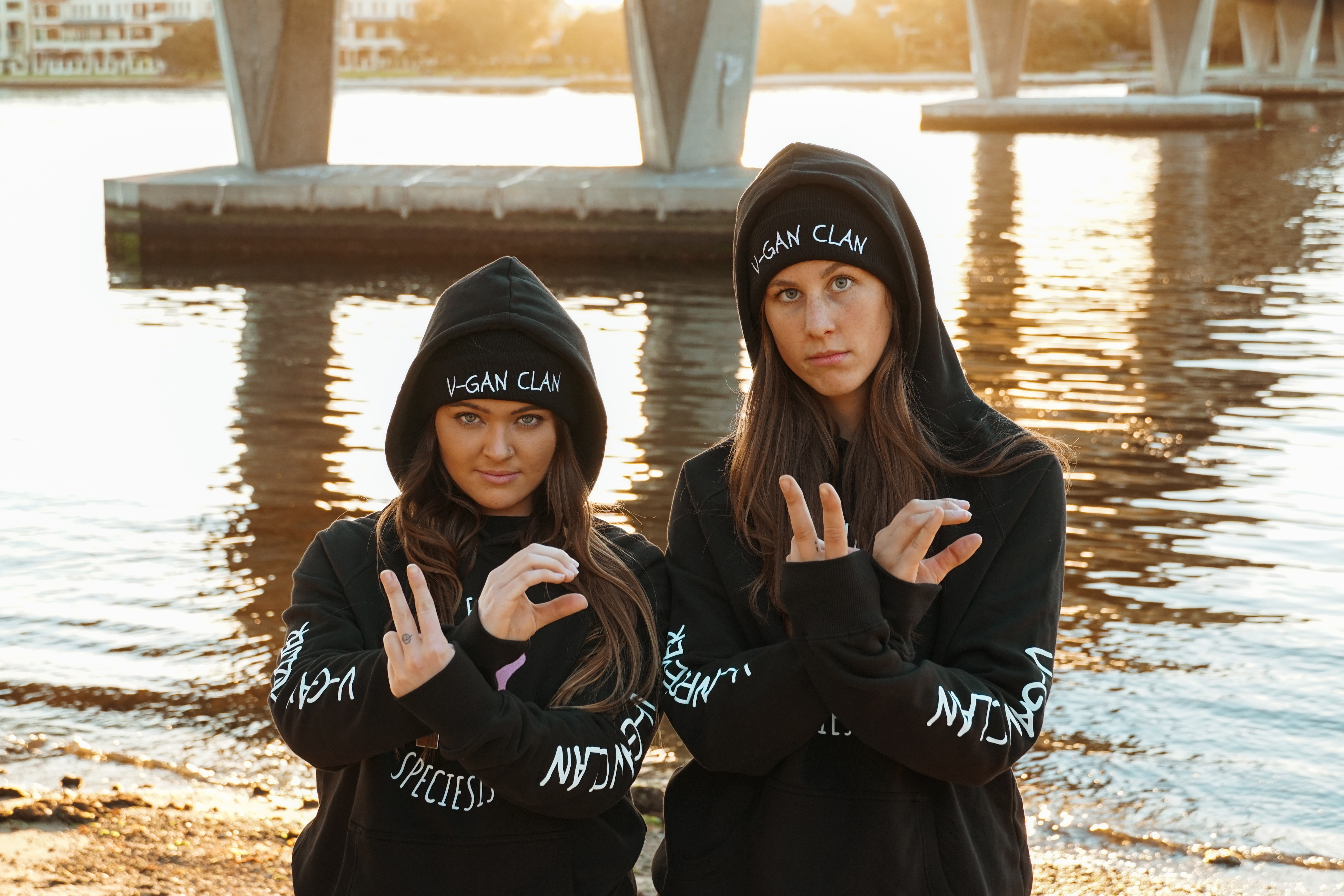 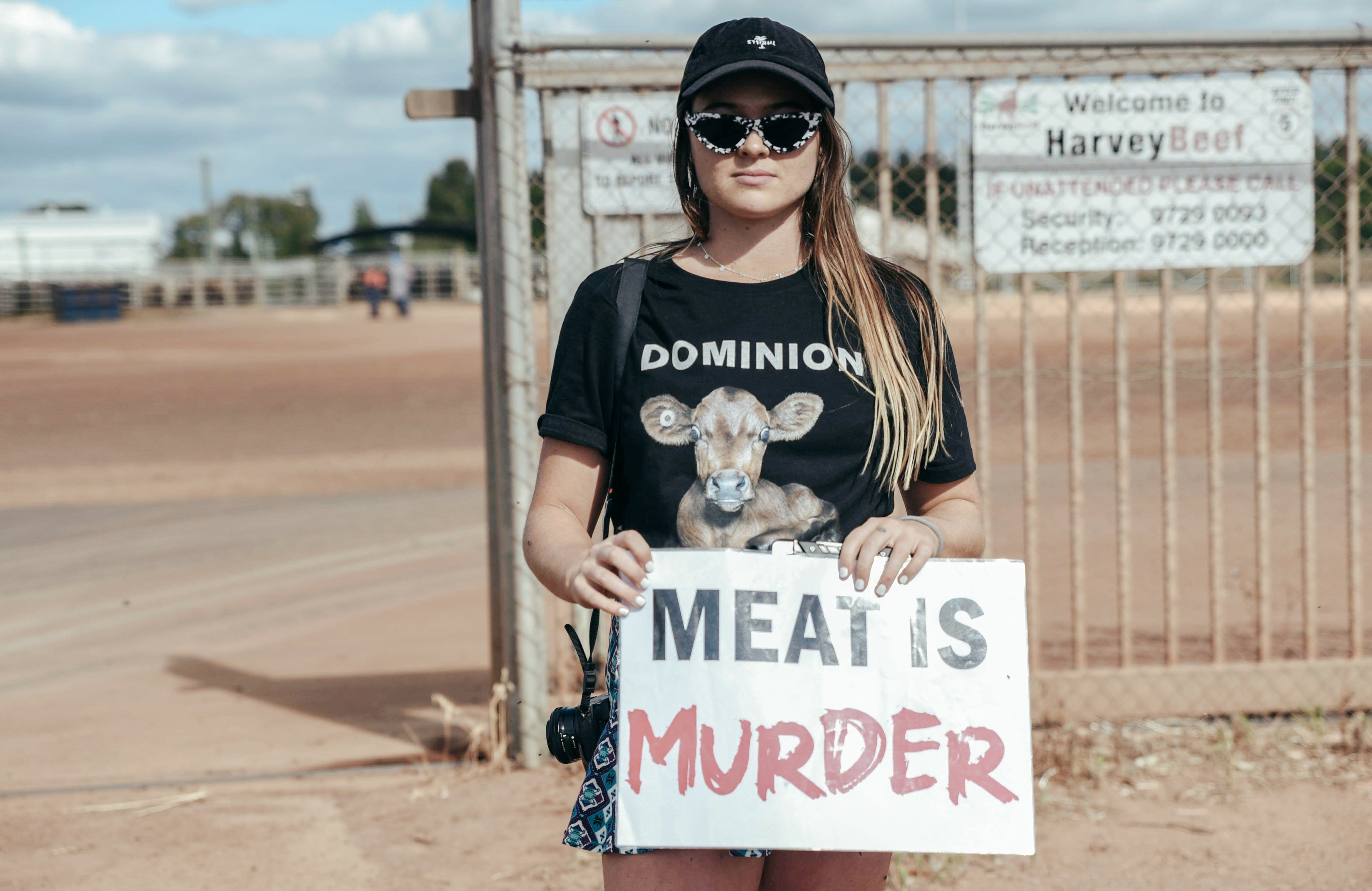 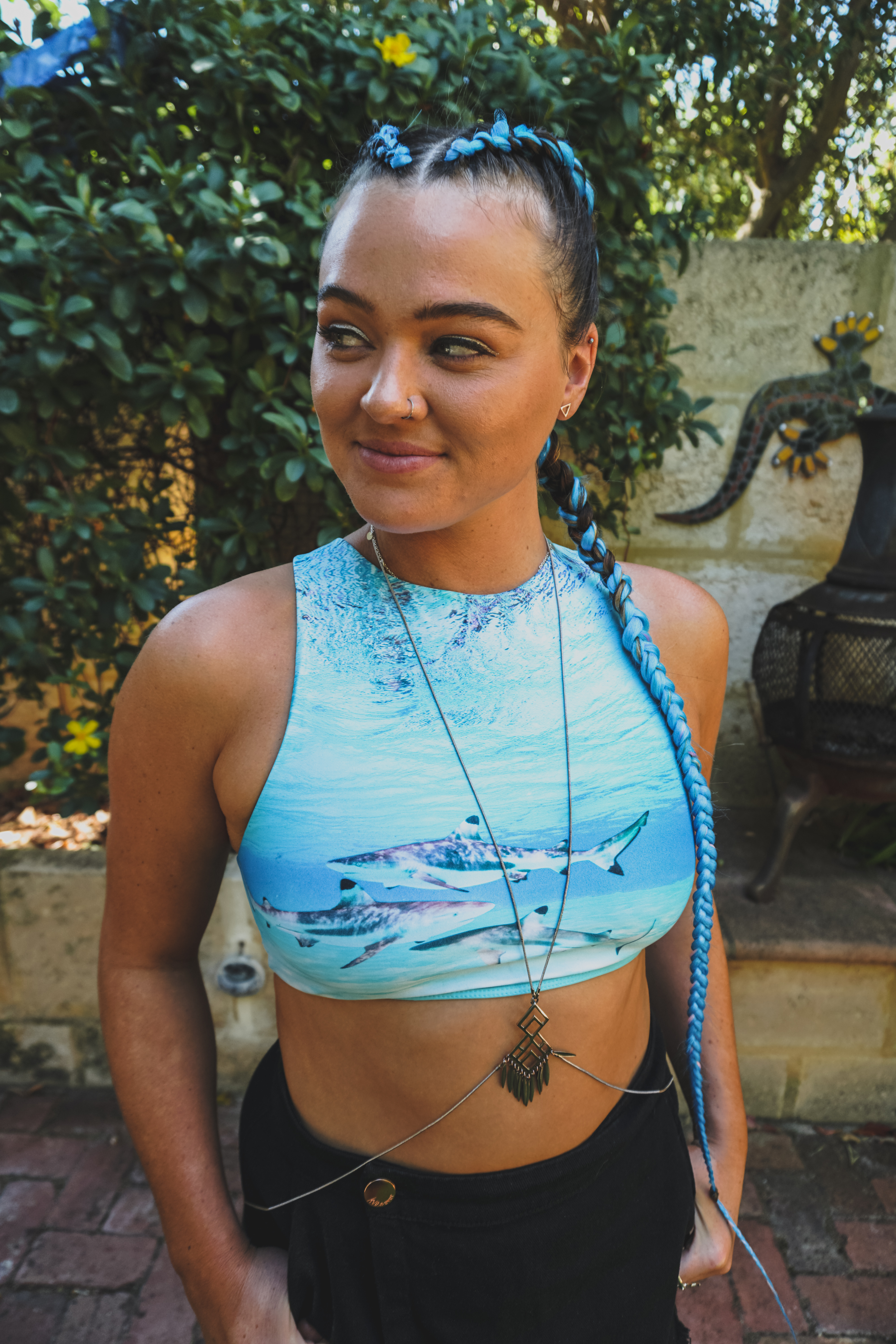 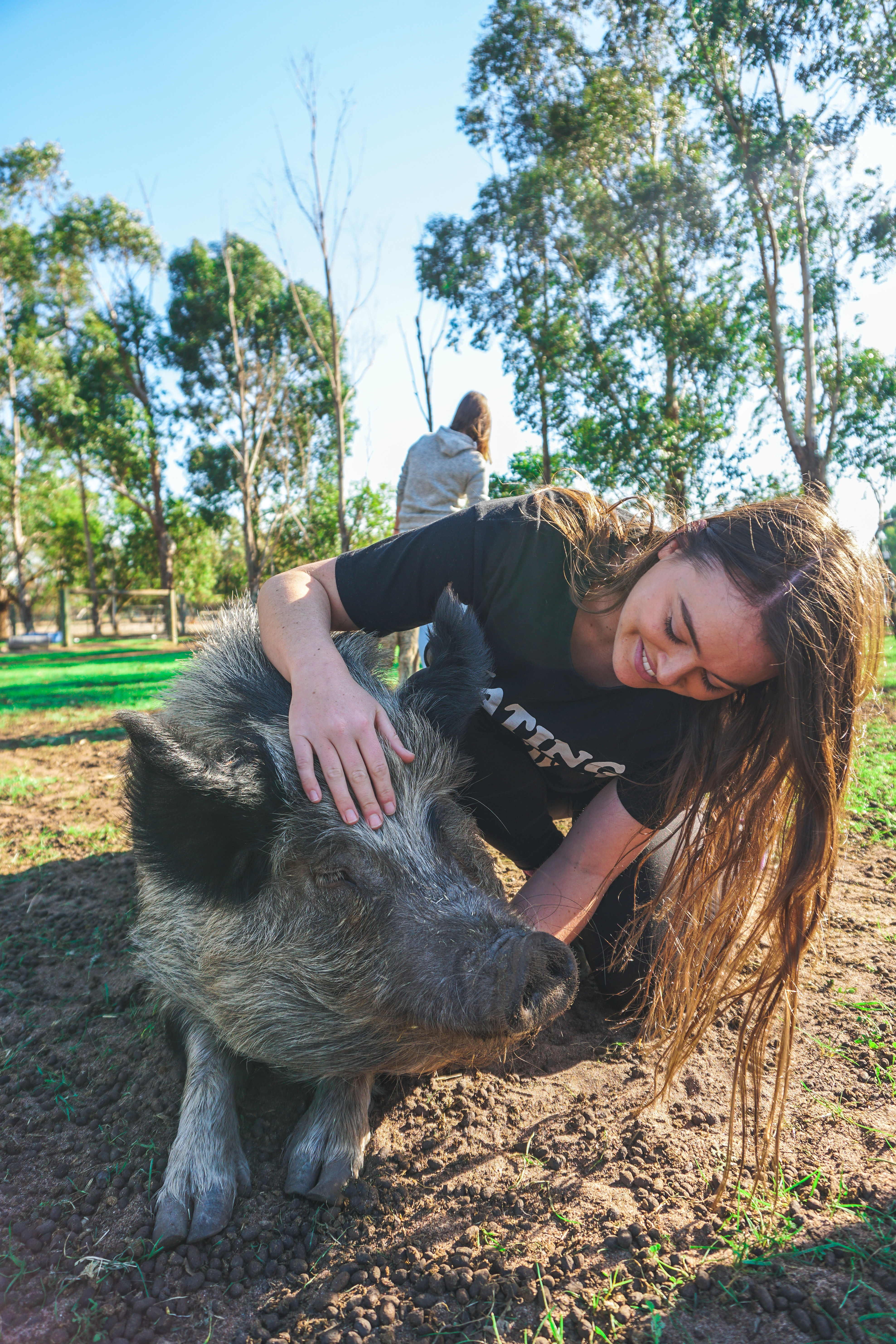 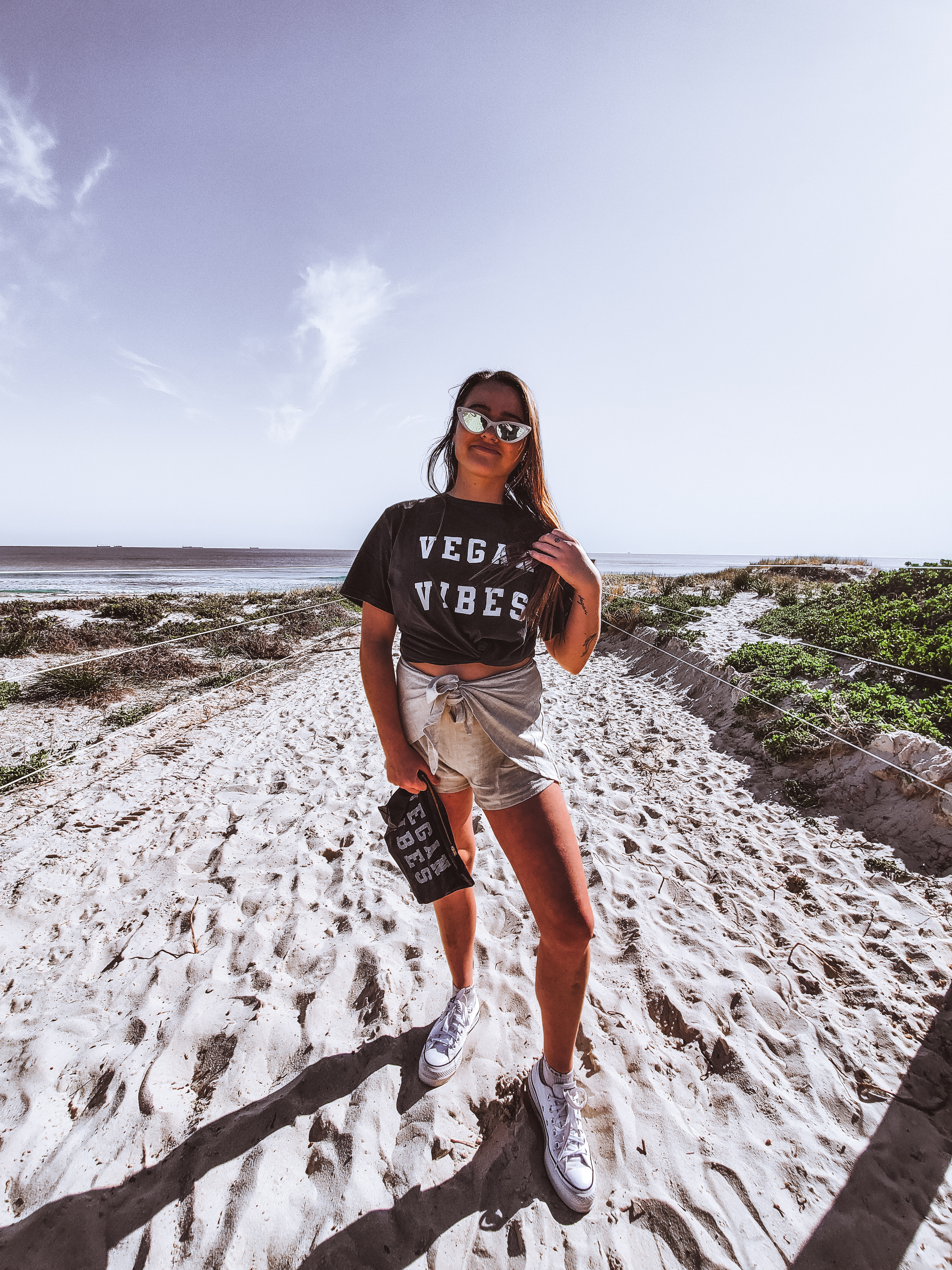 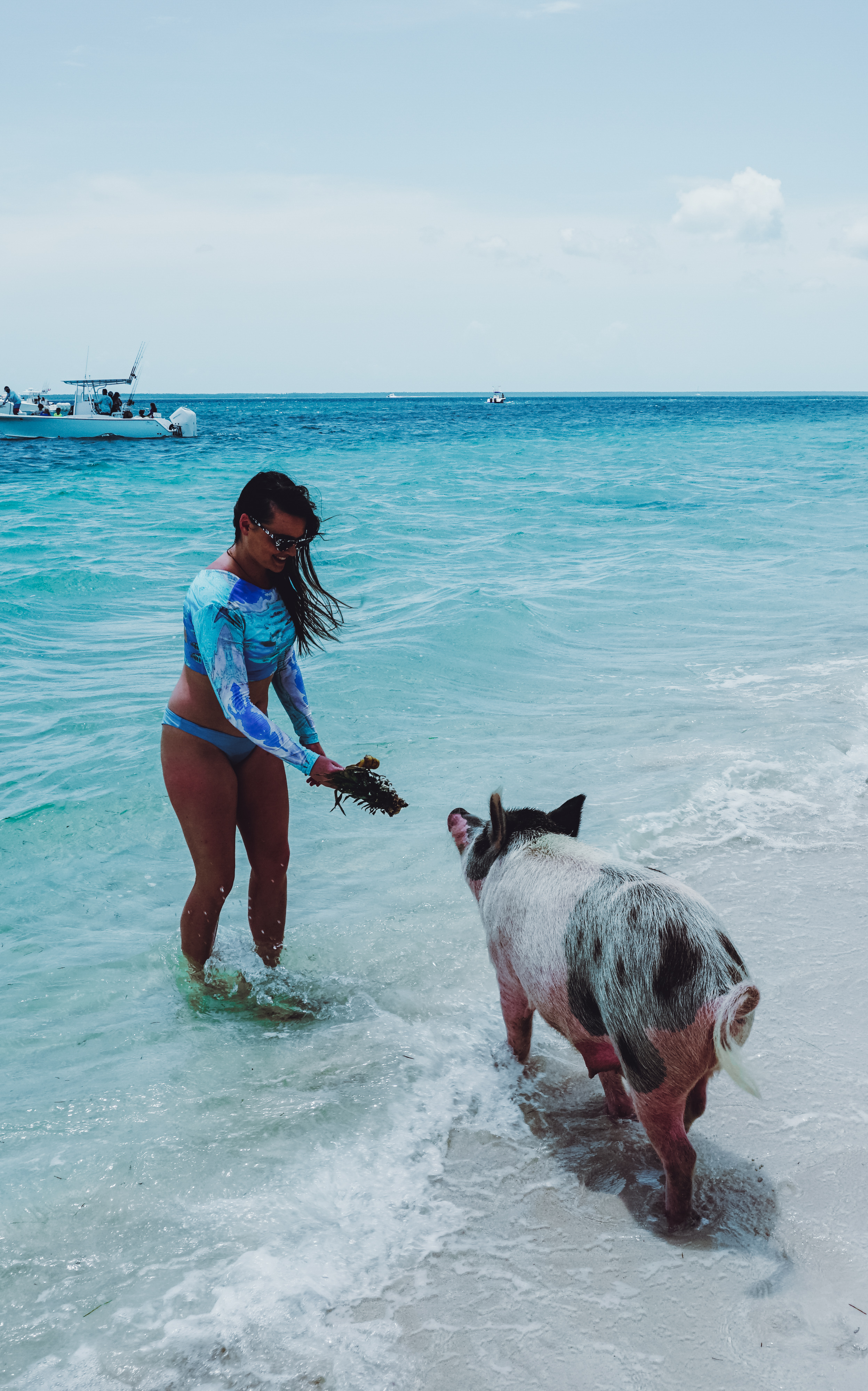 Where do you see the brand and your activism in the next 3-5 years? Any lofty goals?

I am hoping to see my brand grow significantly, as I have put a lot of hard work and money into it over the past couple of years, so it would be very rewarding to see activists and vegans wearing my designs. I hope to use most of the profits for sanctuaries and funding activism events. My goal is to become a full-time activist in the future. I currently have a plan to do full-time activism for a couple of months this year and travel around Australia doing whatever I can for the animals. I usually go overseas for a few months every year to travel, but this year I would like to do activism instead.

If others are interested in activism, how would you recommend they start?

For those interested in starting animal rights activism, I would recommend to join your local vegan groups on Facebook and search for your local ‘The Save Movement’, ‘Anonymous of the Voiceless’ and ‘Direct Action Everywhere’ groups and pages to find out when the next events are happening. It can be daunting going along to an event for the first time, especially if you don’t know what to expect or don’t know anyone else. But I can guarantee that you will love it and being around like-minded people will make you feel incredible. The people that I do activism with are now like family to me and all of my best friends are animal rights activists.

Who inspires your activism? Anyone, we should all be following?

Leah Doellinger, Wayne Hsiung and Seb Alex just to name a few. All of those brave people who expose the dark underbelly of animal agriculture and liberate animals are the ones who inspire me!

What vegan brands do you support?

I support all vegan brands! I don’t really have any favourites, I like to explore and find new ones.

Where is the best place to eat vegan in WA?

Unfortunately, there are not many entirely vegan restaurants in WA. But Loving Hut is one of the few and definitely my favourite! The Loving Hut in Fremantle is the best one, it’s in a beautiful location.

Tash, thank you first of all for sharing your story with us! Secondly well done on all of your frontline activism and what you are doing to help by a voice for the voiceless, inspiring stuff. If you want to check out Tash’s vegan label V-Gan Clan click here, or follow her personal journey HERE.