Over the last 12 months, discussions and disagreements have waged over whether or not vegans should support fast food chains that introduce a vegan option to their predominately meat-based menus. Fast food chains from around the world have released vegan options including Mcdonalds, Dominos, Taco Bell, Carl Junior, Hungry Jacks, Subway and only just this week Burger King announced their Impossible Whopper.

So we have looked into the issue to decide, should we be supporting these menu items given that their companies also serve and profit from meat?

This week a number of papers and publications have come out to discuss the introduction of the Impossible Whopper. For those who aren’t quite sure what that means, the Impossible Whopper is a plant-based version of the traditional Burger King Whopper using the ‘Impossible Burger’ a plant-based burger patty that bleeds and looks just like a traditional beef burger. Much criticism has been raised about two particular aspects of this product release.

We have spent much time debating and pondering these issues which obviously fall close to all of our hearts and we have taken the following stance on the above criticisms of the product.

Is the Impossible Burger something we should promote?

The Impossible burger is a plant-based burger that requires less water, land and most importantly no animals to continue to produce. This means that every single time somebody chooses this option, an animals life is spared and the planet is better off in the process. Whilst the Impossible Burger may not be the healthiest of the plant-based alternatives, when we are comparing it to meat, on the compassionate scale it is certainly the best possible option for consumers.

Relating to the issue of supporting corporations known for meat…

Whilst some will say that only vegans will be trying the burger and therefore they are simply allowing a corporation to profit, are missing the bigger picture. The bigger picture is that, through the media coverage, vegan influencers within friendship groups and those concerned with animal welfare, environmental concerns and others with simple curiosity, will be trying and buying the whopper too.

This leads to more data on the popularity of vegan options and therefore an increase in the production of the product by these companies and others who can see the economic benefit. By promoting this product, it also gives a huge boost to the visibility of the word ‘vegan’ and therefore makes people feel it is a more socially acceptable and accessible option for everyone. In my personal opinion, there is no negative to this kind of promotion by a corporation as we want more exposure to the vegan lifestyle. It also means that on a road trip or when short of options, vegans are now less likely to be ostracised or a ‘burden’ to the group when selecting eating options.

You could even say that they are now helping to spread the word ‘vegan’ and bring it into the mainstream consciousness & dialogue. 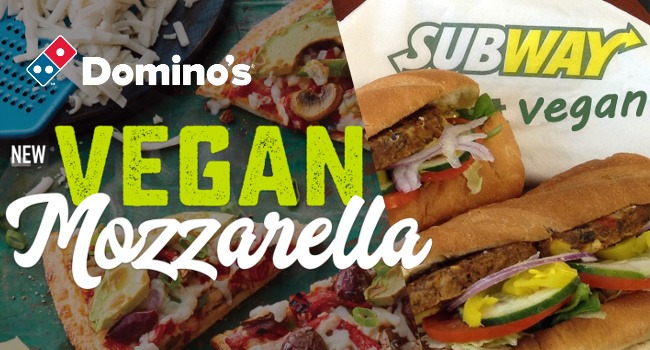 In a perfect world, we would all support only 100% vegan cafes, eateries, and shops, but this is not a realistic proposition at this time in the world.  The only way for us to move towards this type of world is to accept to some degree that we need a whole host of stakeholders, companies, and groups to promote the vegan options and vegan name.

We need to continue to show that eating vegan is easy, accessible, and delicious. This does not mean we are forgetting about the animals and the cause, it means that we are looking at a bigger picture to do true justice to animals over the long term.

We even found a few great videos below on some great fast food options for you to try.

Did you enjoy this article on Vegan Options at fast food chains? For more visit our Vegan Eats Section Here.