Why Hugo Boss’ decision to do vegan matters

Whichever side you fall on, you have to agree that seeing the word VEGAN being used anywhere is a win! A win because the more exposure to the word, the more normalised the whole thing becomes for the general consumer.

The other huge positive is that the brand using the word now knows the value that the word brings to the consumer, increasing the chances of other brands taking note and following suit with their own future vegan product.

Lately, we have seen more and more brands expanding their VEGAN ranges and even introducing new vegan options into the market. One of the more recent examples of this, is an Italian fashion giant know around the world, Hugo Boss.

After years of talks with PETA Germany, HUGO BOSS has launched its first completely animal-free men’s suit in its collection. The suit is certified and sports the “PETA-Approved Vegan” logo. The animal rights group applauded HUGO BOSS for offering its customers this compassionate alternative to wool suits and hopes other fashion houses will follow in the company’s footsteps.

The BOSS design team we are told has made sure that they created the new vegan men’s suit exclusively from non-animal materials. It is made of certified organic European linen and is available both online and in stores in beige, dark blue, and black.

Most premium suits of this kind are made of animal-derived materials like wool, horsehair, or silk—all of which are associated with animal suffering. Dyes, glues, and chemicals in clothing can also be animal-derived and have therefore been excluded from the new BOSS suit.

To help companies and consumers navigate the vegan fashion scene, PETA U.K. introduced the “PETA-Approved Vegan” logo in 2013, and more than 1,000 fashion brands and designers worldwide have had their products or collections certified, including ESPRIT and Topshop.

“We are delighted to see that animal-friendly fashion is on the rise, and BOSS is the first world-known premium brand to set this stylish milestone in menswear,” says PETA Germany Vice President Harald Ullmann. “Kind people can now buy high-end business suits that are not only stylish and fashionable but also cruelty-free and sustainable.” 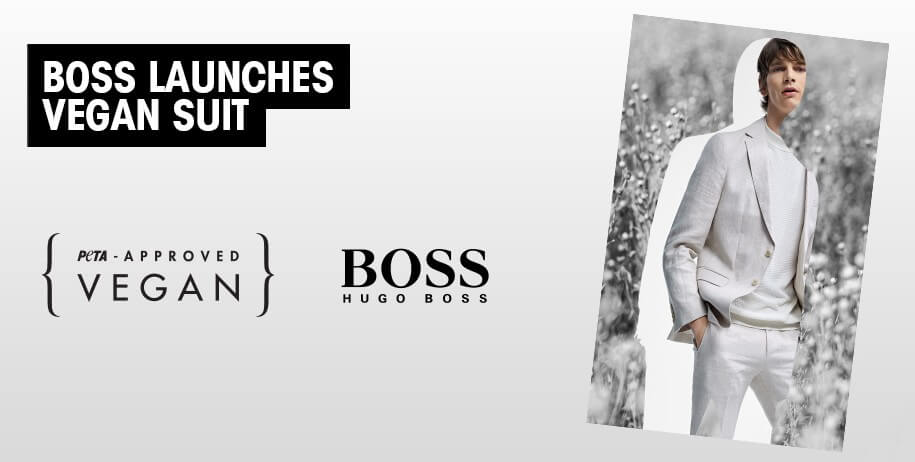 So what do you think of the BOSS Suit? Let us know in the comments below.

To see more of the new products entering the vegan market, take a look at our product section here.

A Vegan Chat With..., Fashion

The best vegan coats to keep you warm this winter