A Vegan Chat With..., Vegans of Australia, Activists

Kristy Alger is not afraid to say what she thinks, get her hands dirty and most importantly stand up for the most vulnerable in our society, the animals.

A number of previous guests suggested we chat with her, and she was kind enough to agree. In this brief chat, we discuss the issue of protests, activism, food and whether or not the future will disappoint or surprise. Kristy’s passion is inspiring, and we hope it will spark in you the desire to do even more for the animals of the world.

Tell us about yourself and how your vegan calling started?

I’ve always had a “love” for animals, very much encouraged by my grandma Maumie who was a lifelong vegetarian and animal rescuer/liberator. But being the daughter of a hunter, translating that “love” into actual respect for other animals took some time. Eventually, exposure to footage from the Australian live export scandal of 2011, watching The Cove and meeting actual vegans in real life set me on a path to veganism and animal rights activism. I initially went vegan in 2012, within a year was involved in an undercover investigation of a rabbit farm, and operated my own rabbit rescue for five years. In 2016 I became a committee member with Animal Liberation Tasmania, and in 2017 co-founded Tasmanian Animal Save.

You protest regularly, what do you believe is your most effective tool or strategy for changing people’s minds on animal rights or the animal ag industry?

My strength is words. I have an honours degree in Ancient Latin Literature so I know how to craft a solid argument, how to research effectively, and how to communicate both factually and emotively. It’s taken me some time to recognise this as being my strength, but now that I have I’m embracing it to the fullest.

You’re not convinced big businesses ‘vegan offerings’ are having as big an impact on the movement as we realise, tell us about that, and what you think we can do to better educate consumers?

There is a mistaken belief that more “vegan” options translate into fewer animals bred, exploited and slaughtered, IE: supply & demand. This is factually incorrect. We do not live in a supply & demand economy. We instead live in an economy wherein corporations create markets and consumers for their products through advertising, trade deals and export. Ever wondered why we have so many new plant-based milk, cheese, and icecreams but dairy yields and herd sizes keep increasing? Our governments and corporations are creating markets in China and throughout SE Asia (look up what the Aus Government did recently in Sri Lanka as an example) for dairy so the industry will never collapse. Smaller dairies may close; dairy corporations will not.

These industries also manipulate public perception through the creation of industry-influenced dietary guidelines that are broadly promoted in schools (Dairy Australia Picasso Cows as an example) to ensure a new generation of consumers is never far away.

This is a real David vs. Goliath battle. And when corporations like Macdonalds, Hungry Jack’s, Burger King etc. release new (albeit exciting) plant-based products they do so knowing vegans will provide online hype for free. We will flood social media with endless posts and pictures of those products, in a way we don’t do for protest actions or animal cruelty exposés. Then we’ll pour millions of dollars into propping up corporations with the worst human rights, animal rights, and environmental policies. David literally starts handing his stones and sling them into the hands of the Goliath.

We gotta eat, and we should enjoy what we eat. But we should stop kidding ourselves that vegan options will result in total liberation; this attitude breeds complacency. Addressing food accessibility, researching how corporations and governments collude to control food systems, and creating connections within our local communities will achieve far more than buying and promoting a burger from a mega-corporation.

What has been the most successful campaign you have been involved in, to date?

I view my whole activist life as one long holistic campaign interspersed with chapters. And each chapter has brought about successes, challenges, failures and growth.

The chapter that stands out most for me though happened back in 2017 when a local arts festival Dark MOFO (run by MONA & David Walsh) brought Hermann Nitsch to Tasmania to host his performance piece 150.Action. A bull was to be deliberately slaughtered specifically so performers could roll in his corpse, tear the flesh apart, pour the blood of twelve slaughtered steers about, in what the artist himself describes as an “orgiastic celebration of chaos and cruelty.” I spearheaded the campaign to shut it down; we ultimately failed and the bull was slaughtered in a local Tasmanian slaughterhouse. But I learned a huge amount in those six weeks, such as how to control the messaging, directing the public narrative to counter the excuses and lies of the event organisers, public communications. In the end, ticketing was sabotaged so an expected audience of two thousand was reduced to a few hundred. And those who attended had to walk a gauntlet of over one hundred protestors, holding pictures of rescued bulls and mirrors to reflect themselves back at themselves, effectively telling them to have a damned hard look at themselves. No consolation for the bull who was killed, but the reputation of that festival has since been damaged. This year they hosted a performance piece investigating the slaughter of pigs, but instead of real pigs, they used humans in costumes. I like to think our campaign against 150. The action was part of why that piece was featured.

How do you remain positive in the face of the cruelty and exploitation that you see?

I don’t remain positive. I’m a deeply pessimistic person and that pessimism is, unfortunately, becoming more pervasive as I progress further into activism. It’s hard to remain positive when you’ve seen some of the things I’ve seen. Laws are being changed to suppress activists among all social justice movements. Our government is becoming increasingly more oppressive and fascist in nature (which given “Australia’s” roots in violent colonialism says a lot).

But whilst I have limited hope for the future I do maintain faith in myself, my children and soon to be husband and the activists in my close working circle. And so long as I maintain that faith I’ll maintain the endurance necessary to continue fighting in solidarity with non-humans and humans alike.
And who knows, maybe the future will surprise me.

Where do you see your activism in the next 3 – 5 years?

It’s hard to say. Here in lutruwita/”Tasmania” new draconian anti-protest laws have been introduced that protect businesses and individuals from criticism, boycotts, and protests. Something as simple as blocking a truck for two minutes at a slaughterhouse vigil could potentially result in up to four years in jail and massive fines. These will deter people for very valid reasons, but I am in a privileged position to be able to challenge those laws and likely will. So who knows what may happen.

All I know is as animal liberationists we must acknowledge the work of activists who have gone before us, as well as the work of other social justice movements. And where possible we need to band together in the face of increasing state oppression. If we allow the powers that be to divide us we will fail. And in animal liberation, when we as activists fail we aren’t the ones who primarily suffer for it.

Who do you look to for inspiration?

I look to the people next to me, on the ground, acting on a grassroots level. Some of us in this movement have been afforded the honour of being more visible, mic in hand, on a stage. But it’s the people whose names you will likely never know, their perseverance, presence, and actions that inspire me most. We place too much emphasis on celebrity in this movement; the truth is none of us with a platform (irrespective of how “big” we are) would be where we are if not for the thousands of people doing the work where it needs to be done. 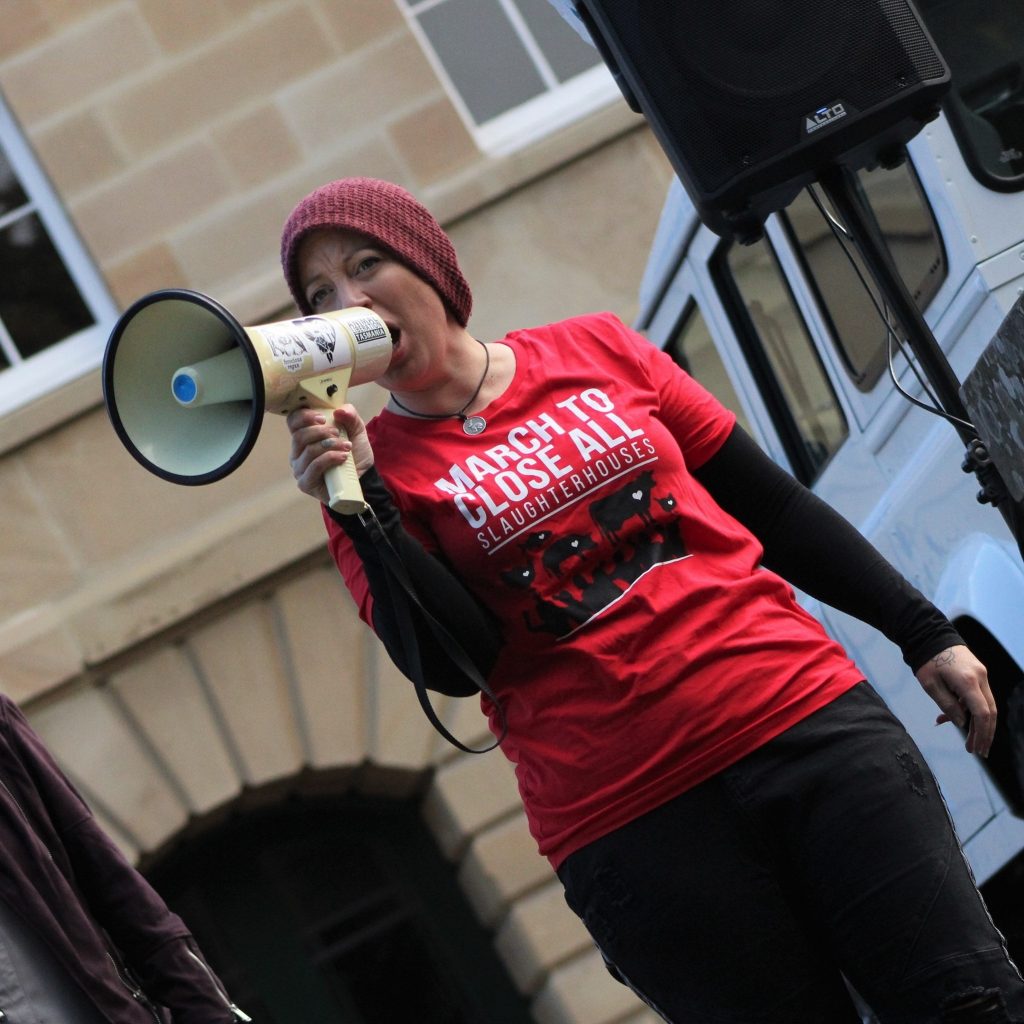 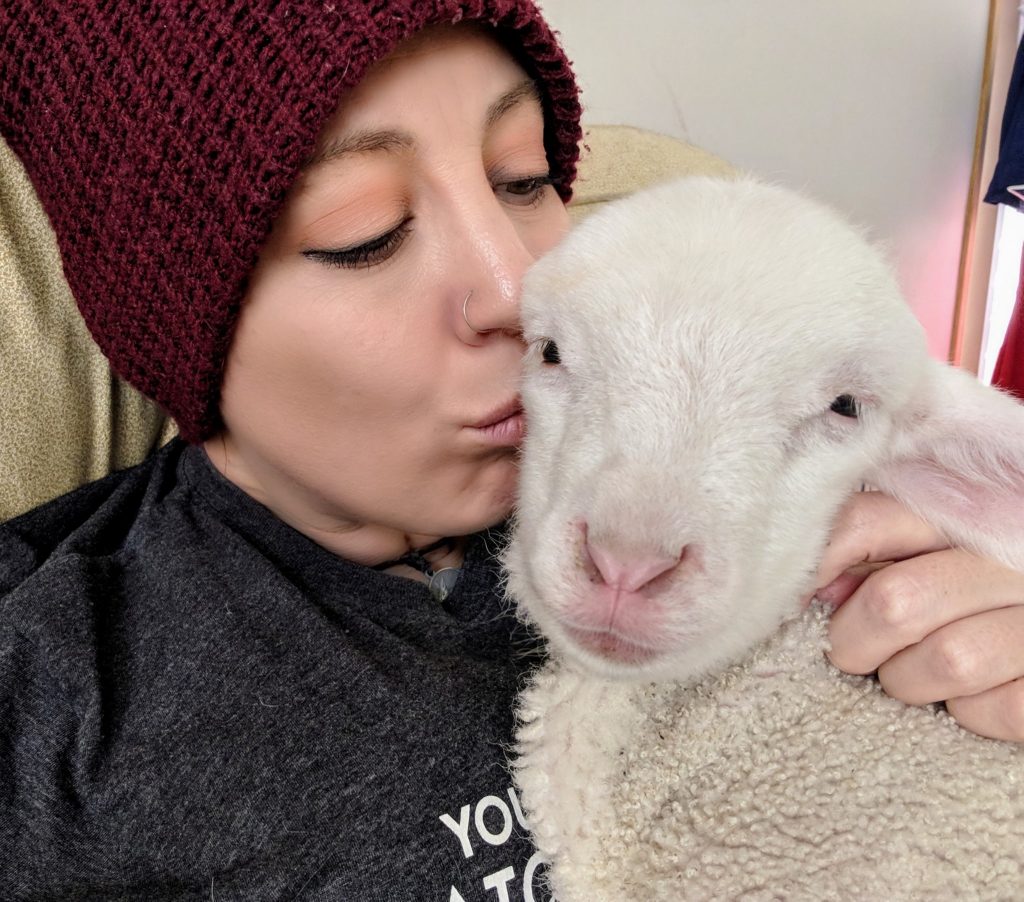 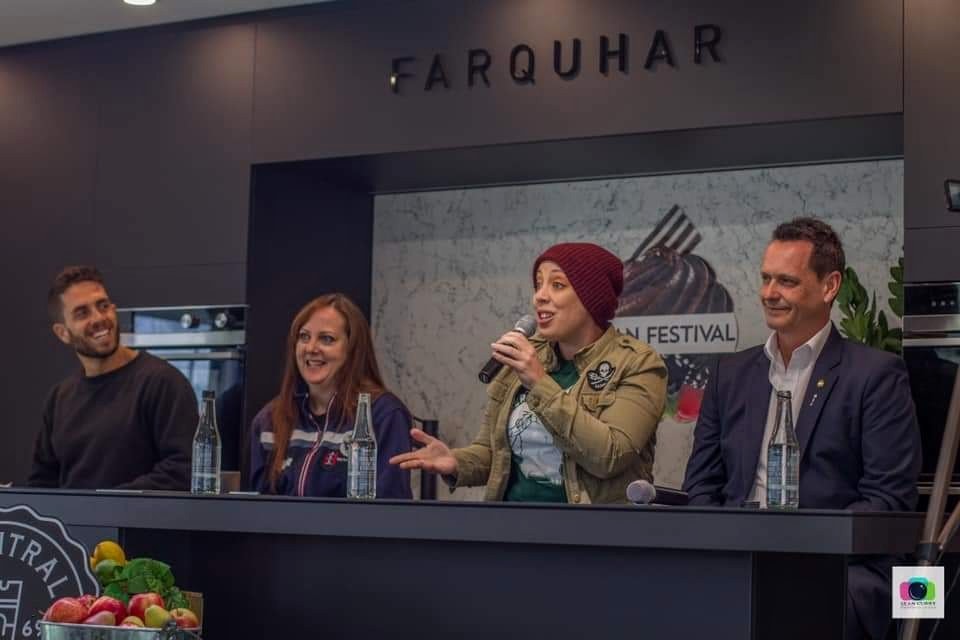 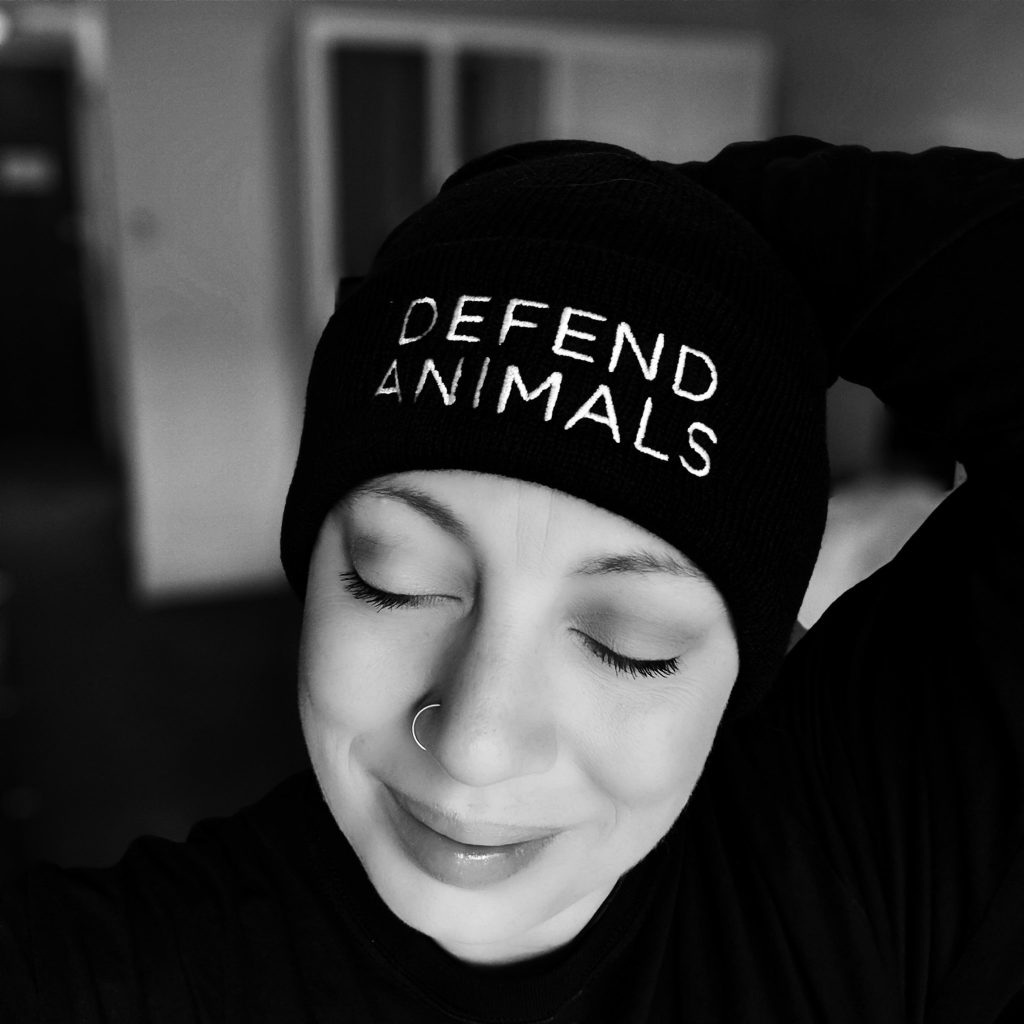 What brands do you support or think people should get behind?

Research brands to see what their human, animal and environmental policies are. Plant-based doesn’t automatically mean ethical manufacture. Question your consumption. Purchase what you can through co-ops, locally or through activist groups. That way money goes into the community, not corporate pockets.

The book that changed your life was …

Call of the Wild by Jack London has had a profound effect on my perception of the human relationship with other animals, on the domestication of non-humans, and lead me on a path to question just how in control we really are as a species. The wild is always bubbling away close to the surface in all of us.

The documentary that everyone needs to watch is…

The Animal People has just been released, documenting the story of SHAC and the SHAC 7, and I think it could be an important tool in informing the public about direct action and activism as well as government oppression, the police state, and industry corruption. But for existing activists it is vital that we understand our history; what has gone before will happen tomorrow if we do not learn, adapt and progress.

One name springs to mind; Lea McBride. She’s an AR activist from Adelaide who organises Vegan Festival Adelaide amongst many other amazing events. Lea is a powerhouse and has been instrumental in boosting my activism platform. She’s created an incredible festival with the perfect balance between food & entertainment and animal rights activism.

Kristy, thank you so much for this insightful chat. We wish you all the best with your continued activism and advocacy. What you do for the animals is amazing and we all commend you for the often thankless task of sticking up for them. If they could talk, they would certainly say thanks!

To read more about other amazing vegans, visit our vegan chat section HERE.

Want to know which Vegan Brands took out this years Nourish Awards?