A Vegan Chat with Dean Maher of Uphill Vegan

Earlier this month we learned that Dean Maher had successfully climbed the south face of Mt Everest. Not only is this an incredible feat, but Dean has done this as a vegan, the first ever to do so.

This meant that none of his clothes contained the traditional animal materials used by most apparel makers, and secondly, his nutrition was 100% free of animal products too.

When we heard, we knew we had to chat with Dean. Lucky for us, he is an incredibly nice bloke who shared his thoughts with us below.

You climbed Everest, tell us about the feeling of getting to the top after months of hardcore training?

It was a very strange feeling for me. On one hand, I’d just reached the top of the world which was something I never imagined I would do. The scenery was absolutely breathtaking (quite literally) and all I could think about was what impact it could have for reducing the amount of animal suffering in the world and for veganism in general. But on the other hand, it was extremely cold, windy and there was very little oxygen in the air so I just wanted to get back down.

Tell us about the vegan-friendly brands and products you use to climb?

The main vegan item for my climb was the “Save the Duck” summit suit. This was first worn by Kuntal Joisher on the summit of Lhotse last year. Up until then the only options on the market were down filled suits. I’d emailed all of the manufacturers but no one was prepared to make one up until then. I wore a pair of mittens that were hand made in Nepal and supplied to me by Kuntal. I also wore a “Vegan Athletic” t-shirt as much as I could. The vegan writing on the front invited a lot of positive conversations, especially on the hike to base camp.

Are there any other brands you support outside of training or in general that you want to mention?

The other brands I wore were not exclusively vegan but had synthetic products. Mainly RAB, Mountain Equipment, and Patagonia. I also ate a lot of Clif bars!

Tell us about what your diet looked like whilst climbing?

On the way to base camp for breakfast, I would have porridge made with hot water. To that, I would add my own soy milk powder, chia seeds, hemp seeds, peanut butter, cinnamon and sometimes a spoonful of jam. For lunch and dinner, I would almost always have dal bhat which is the local Nepali dish consisting of rice, lentil dahl, and vegetable curry.

When I reached base camp I would have the same porridge mix I mentioned above and a few vegan chapattis which I’d spread peanut butter on to. Lunch and dinners would include things like fried potatoes with mixed veg, pasta, chips, baked beans, veg fried rice, Tibetan bread, dal bhat, etc. Where mine would differ is that the meat eaters would have some tinned processed meat as well and some kind of creamy sauce on their vegetables and salad, both of which I was very happy to not be consuming. Desert would normally consist of tinned fruit. There was the occasional cake made which I couldn’t have so I would have fruit instead.

As I got higher I would eat some freeze-dried meals that I brought along with me and some Clif bars for snacks. At camp 4 I had some meal replacement powders that Kuntal had given to me. They were a super convenient way of consuming 600+ calories when I really didn’t feel like eating. I also had some Clif gels that were a convenient source of calories as I was climbing. 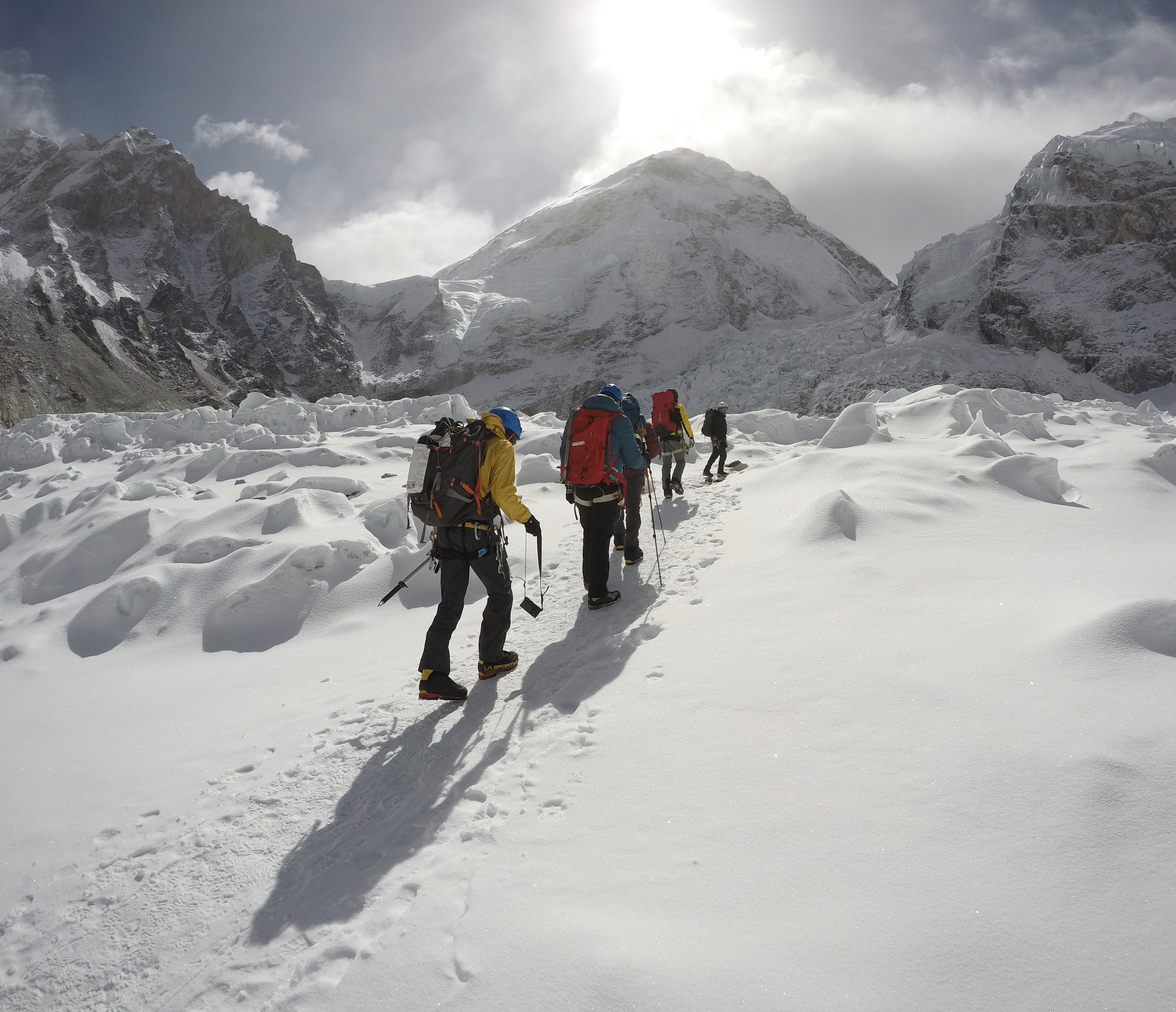 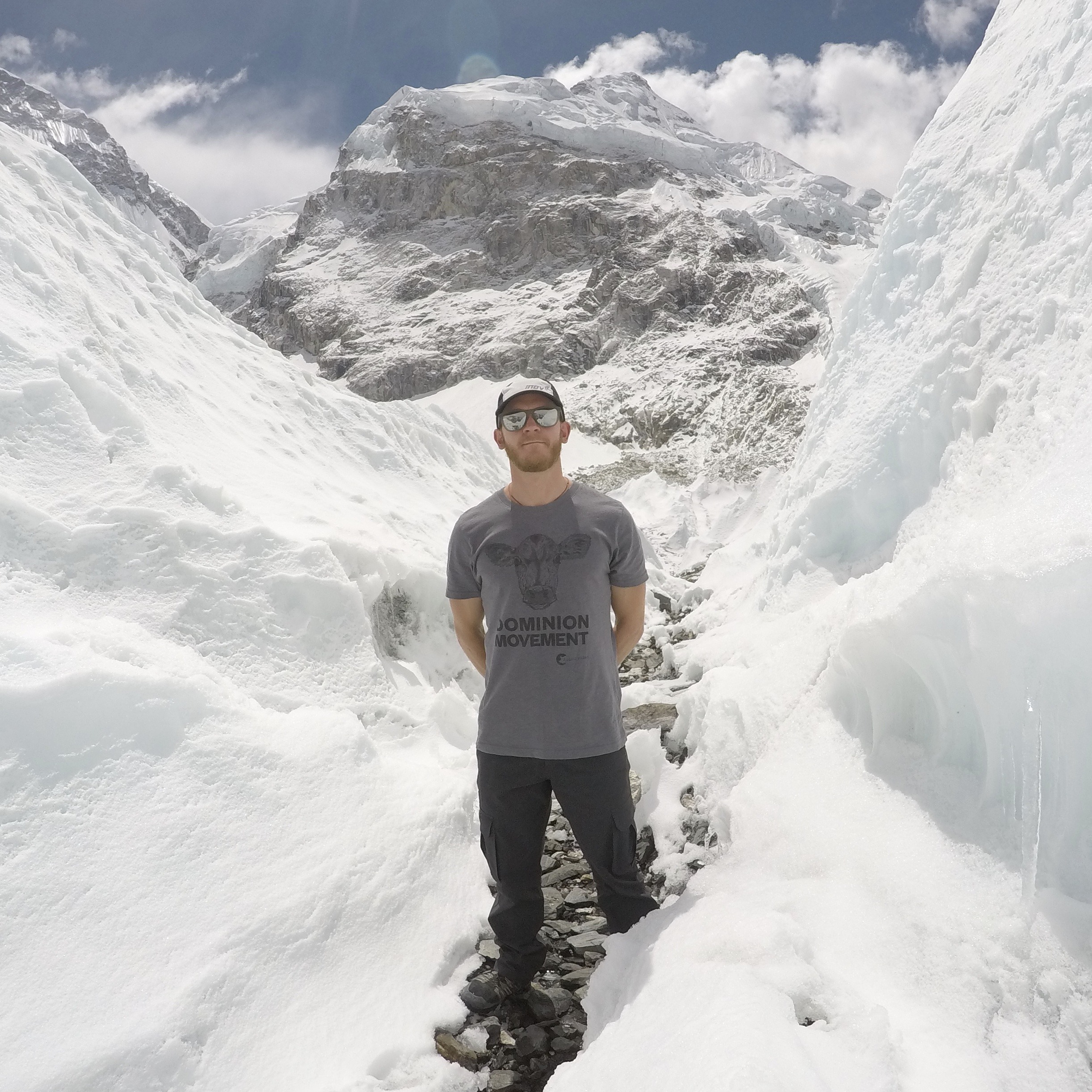 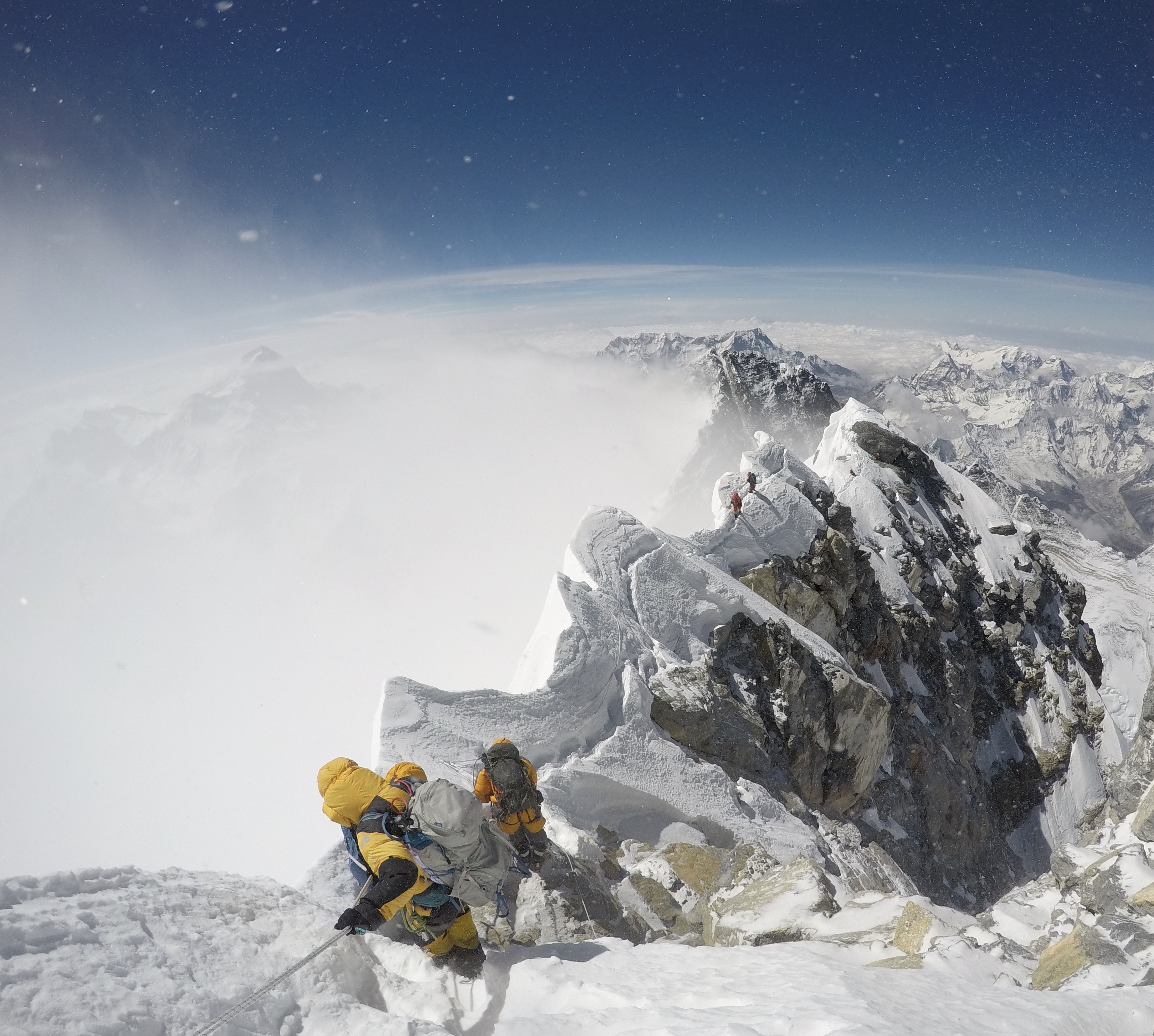 What is the most common question you get asked as a vegan athlete?

For me, because I depend so much on my gear and clothing for survival it’s normally about that. I think for others it’s been the protein question but I think nowadays the protein myth is slowly being debunked so people are moving on to more constructive questions.

What advice would you give a climber or athlete who is looking to go 100% plant-based?

Just do it! There are no excuses now. If I can reach the summit of Mt Everest 100% plant-based then anyone can do it. And it’s not just me, just look at all the other vegan athletes at the moment, people like Kuntal Joisher, Scott Jurek, Catra Corbett, Nimai Delgado, etc.

What would you like to achieve in the next 5 years as a vegan athlete?

I’d love to keep returning to Nepal and keep climbing mountains. Hopefully next year I can try to climb the north face of Everest then after that, who knows! This is very much dependent on finding sponsorship though as I am now very very poor,

What is your favourite vegan cheat meal?

My favourite cheat meal would definitely be the odd vegan pizza! A few of the big pizza chains in Melbourne have vegan menus so a delicious vegan pizza is always 45mins away!

My favourite cafe in Kathmandu definitely has to be the French Bakery. They’re not completely vegan but they have awesome vegan options and the owner is very passionate about adding more options. In Melbourne, it has to be the Vegan Shack. Check out their Instagram, I can personally confirm that their food tastes as good as it looks!

Thank you so much for sharing your inspiring story with us Dean! We hope this will inspire many more future vegan athletes to go out and chase their dreams!
To continue to follow Dean, check out his Instagram account.

Alternatively, if you are interested in performance checkout our athlete’s section HERE or vegan protein at Vegan Liftz. (tons of plant-based products).