Billie Eilish is doing a lot for veganism.

Billie Eilish is someone with her own mind, her own ideas, and 87 million Instagram followers.

She’s a global music star who only a few years ago, wasn’t even on the radar for the average music fan. Since landing on the scene, her unique style and voice have attracted the attention of the next generation and she is fast becoming one of the biggest names in music.

This week, she did an incredible service to the animals of the world and the vegan community. She came out on her Instagram story to promote an investigation into a large-scale dairy farm called Fair Oaks. She slammed the footage and encouraged her fans and followers to consider, why given all the evidence we have, they would consider supporting these industries.

The post marks a huge step in a global celebrity standing up to a large mainstream corporation and such an overt manner. The Fair Oaks Farm is affiliated with Coca-Cola Corporation and so to see a musician in her position put morals first was incredibly refreshing. 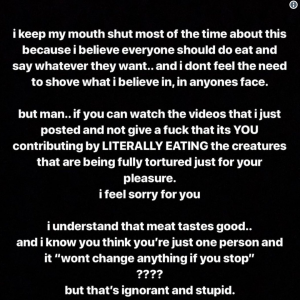 Billie has spoken about her vegan lifestyle in a number of articles, videos, and interviews and we thought we would take a look at a quick few below.

0 comments on “Billie Eilish is doing a lot for veganism”