Talking to people about veganism

Last week we posted out a statement that we are big believers in. The statement, displayed below received a large number of positive comments and a robust discussion on the best ways to talk to people about animal rights, food choices and deal with veganism in general. The discussion on social media was so important that we wanted to create a place for the discussion to live. Below are a few of the points put forward and we encourage everyone to have a read and leave any further comments in the comments section below. The more we talk, the better we can be at creating change with people around us. Something the planet and the animals will thank us for. 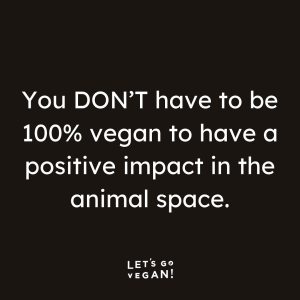 We received a comment recently from someone who had dramatically cut their meat and dairy intake but felt that they couldn’t be fully vegan. Within this space there are some who take an all or none approach to veganism and we respect their hard line stance and understand that they don’t want to compromise their ethics in any single way. The approach we take however is that not everyone will go vegan overnight, but that everyone can make changes, adjustments and gradual steps in the right direction. We need to encourage not put off those who want to make changes. You don’t have to be 100% vegan today in order to make a difference. Every vegan meal, fashion item or decision is one step closer to a better world for the animals and the planet. So this week, don’t try and be perfect, try to be better. What do you guys all think of this approach? #veganism #veganjourney

Now here’s what you had to say.

This is so true, it’s made harder by a world that hasn’t widely accommodated veganism but that is changing. I am fully vegan now and over my transition of 5 years (most of that being a vegetarian) I’ve noticed great advances in the ability to live a relatively socially normal food life being a vegan. Today I can safely say I feel like I’m not missing ANYTHING not eating any animals or their byproducts. Makes me excited for the future!

Yes! Better to have 1000 people doing it imperfectly than 10 perfect people!! Spaces that encourage others will certainly be a lot easier for people to transition fully if they would like to!! I feel this as I am still in between vegetarian and vegan and having support and encouragement from other vegans makes me more determined!

I really love this message. I’m an all or nothing vegan for my own reasons but I’ve always said that hostility and criticism isn’t the way to encourage others to make their dinner plate more compassionate. Nobody responds positively to criticism and this is what gives vegans a bad name. Any non vegan who is willing to try a vegan meal, try a vegetarian week, try a dairy free month… they should be commended and celebrated. People will only fall in love with vegan living if they are introduced to it in the right way. Love everyone regardless of their meal choices 🙂

i definitely agree that we should be encouraging, rather than criticising those who are making changes. however i think it’s important to find out what people are finding challenging in becoming completely vegan, and then help to educate and facilitate their transition. a lot of the time vegetarians, or those who don’t always make vegan choices aren’t aware of the cruelty of industries such as dairy and eggs. “meatless monday’s” or “only eating animal products on the weekend” is fixating on veganism as a diet, rather than an ethical position. if we apply this same logic to other ethical issues, say domestic violence, it sounds ridiculous to have “violent-free monday’s”. i only draw this parallel not to equate the two issues, but to reinforce veganism as an ethical abstinence of, and position against animal abuse. if we claim to be against animal abuse, it’s important to be consistent with our said values and actions. “i only eat a little bit of meat” is similar to “i only pay for a little bit of animal suffering”. however i don’t believe this is the fault of the individual, and rather a result of our disconnected society. that’s why education is SO important so that we can inform others about not only what happens in these industries, which they’re most likely opposed to, but the MANY alternatives to suffering easily accessible and available to them☺️🌱

Totally agree, any step towards eating less meat and more plants is a good one 💚 however it’s sad that even amongst the vegan community there are vegans that will criticize other vegans because their diet isn’t healthy enough or because they aren’t eating WFPB diets 😔

We’ve had an interesting 30yr vegan journey…this new revolution is very exciting and we so welcome the inclusivity. It also makes me excited for the future of the world – one I dreamt of but never thought would be a reality in my life time…never even thought I’d see this revolution! The “Plant Based” movement is of course primarily motivated by an interest in human health but if this leads to a reduction in eating and cruelty towards animals, then that is a good outcome and plant based folk might then be more open to listening to the ideas of ethical vegans. It’s having some interesting impacts though…we went to our local Woolworths yesterday to buy some veggie burgers to find they’d all been moved from the deli fridge to the new “Plant Based” section of the animal meat section…very confronting & confusing when I’ve spent the last 30 yrs, avoiding this section so as to avoid trauma every time I shop! So, whilst I love that The China Study & the Plant Based movement have opened many more people up to eating leads or no meat/animal derived “products” and that it has brought on board big business in producing many more vegan products, we have to be vigilant to keep animal rights in the picture. The PB movement is huge (that’s why business is onboard) but threatens to muddy the waters as the Woolworths example shows. Judgement, dogma and criticism never does a good job of influencing😁💚🌱💚

“Baby steps are for babys!” 👻👻👻. People are going to do as they can anyway so lets “support” but not too much. I think “shaming” is counterproductive and obviously we can have differents opinions. transitioning is a process but when someone says “I really cant give up on cheese” I feel like somerhing is wrong, like what this sentence even mean? If we tell this person “yes I know take your time” we are going to confirm the idea that cheese is a personal choice. We can still say in a polite way “I disagree with you thinking that you are entitled to someone else milk”. Today the general opinion says that even answering like that is preechy… I mean maybe it depends from the person we talk to, but in 2020 to say “do what you want with the body of someone else” is the wrong message. All this “in between phases” can be sens as “steps that lead to somewhere” or “obstacles that block the path” … (omg I actually sound like the prechiest person ever 😂😂)

What do you think?

The idea of this article is to spark a conversation to allow us to better present the vegan / plant based lifestyle to ‘everyone’. Our stance is that whilst we stick to a 100% vegan lifestyle, we still have to meet people where they are in order to positively change their minds. We think any all or none attitude detracts from motivating and can alienate those who may change if given time to do so. We may also be wrong.