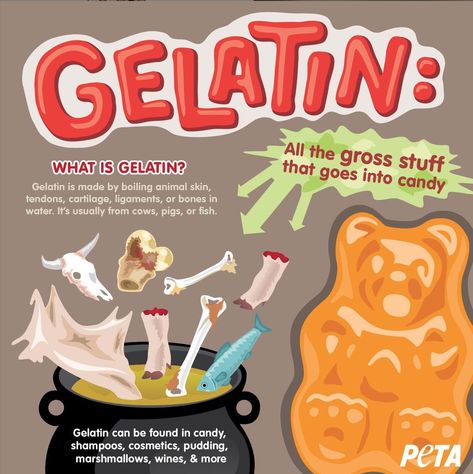 According to PETA (People for the Ethical Treatment of Animals), Gelatin is:

A protein obtained by boiling skin, tendons, ligaments, and/or bones with water. It is usually obtained from cows or pigs. … However, there is a product called “agar agar” that is sometimes marketed as “gelatin,” but it is vegan. It is derived from a type of seaweed.
– Apr 6, 2020

Most people are unaware of what gelatin is and just how prevalent gelatin is in everyday items. Here in Australia, it can be found in most confectionary lolly varieties as well as in medicines and some additional food groups.

Whilst it is present in many confectionary lines, there are still however a number of everyday lolly varieties found at Woolworths & Coles that don’t (on the last check) contain gelatin. Some of these brands and varieties are:

As mentioned above by PETA, you can also look for alternatives that contain Agar Agar an alternative used to replicate gelatin:

There are also a whole host of 100% lolly brands and companies that produce vegan sweets. These can be a little harder to find, as they usually aren’t stocked in your larger grocery stores, but a quick search online will help you find them. Some brands that our community love are:

So next time you are looking for a sweet treat without the ligaments & bones, why not lookout for some of these vegan or accidentally vegan varieties at your local store or online!

Did we miss a variety that you think should have been included in our What is Gelatin? piece? If so let us know at hey@letsgovegan.com.au and we will happily update the post.